The southern part of Lesotho is comprised of three districts and stands the worst places hard hit by climate change dating back to 2007, the result of which was a rampant food dearth crisis.

Owing to the sloppiness of the geographic position, the three districts; Mafeteng, Mohales’ Hoek and Quthing have been losing heavy tons of soils per year. It is estimated that due to heavy rains, 38million loads of soil is lost which birthed desertification and gully lands.

Soil is a central and significant commodity and main employer in the Mountain Kingdom of Lesotho as the majority living in the remotest areas of the country depend on Agricultural products as part of their livelihoods.

According to the Lesotho National Adaptation Programme of Action (NAPA) Lesotho losses a maximum of a lucrative 730, 771 tonnes and 38, 842, 399 tonnes of soil per year as a result of gully erosion, sheet and rill erosion respectively.

The southern plains cover circa 253, 148 ha and are generally hotter and dryer with annual precipitation ranging from 600 to 700 mm per annum. This area roughly covers, 175 597 people. The four main bases of livelihood in this region are; food crops, paid employment, livestock and trade.

“Up to 53% of the population is estimated to be poor. The poor are highly dependent upon local wage employment as a source of income, and derive the smallest share of income from cash crops, focusing narrowly on vegetables surplus on their own needs.

“Over 70 per cent of the communities derive their livelihoods from Agricultural activities. The rural communities are dependent on agriculture to meet their daily food supply and generate income.

“Lesotho is immersed in on-going crises for severe food security and failing to livelihood. The country imports at least 60% of its annual cereal requirements,” the report posits.

In 2016, the climate impacts exacerbated, living the communities in the southern region in starvation and due to little or no food production, which sustained its impacts to the extent where occupants ran a lengthy period of time without food and water.

In particular, the Makoabating community in the Mafeteng district suffered land degradation and soil erosion so much that the fields were left bare without capacity to produce food.

The same teething troubles were experienced by the Mohales’ Hoek and Quthing villages where lack of water was also a prevailing predicament.

Their fields turned into valleys, poor ranges that had developed deserts, lack of water and toilets. Roads are major problems.

According to the Climate Change Expert, Theletsa Mpholle, the southern region of Lesotho has been hard hit by severe drought and soil erosion for the longest time in the country, one reason being its geographic setting where the soil is easily washed off due to the sloppiness of the land, thus making the occupants susceptible to hunger and starvation.

“This region is the driest in Lesotho. When the rain falls, the soil is easily eroded other than the other districts in the country. It is true that rain does fall to all the other parts of the country, but water evaporates quickly this side and gets too dry. Most of the vulnerable people in this region have their fields removed and washed off. They are unable to till the land like other parts of the country,” Mpholle said.

“This region is sloppy but the most important part to note is that, most soils in the country differ according to their geographical location. The important step is to plant seeds that would be resistant to drought and suitable for these areas.

“These places have been affected for the longest time by the climate change, the condition is worsening, that’s why there are many projects directed to this side.

In an effort to curb the impact of the vicious climate change, the Lesotho Meteorological Service (LMS) in partnership with World Food Programme (WFP) Ministry of Forestry, Range and Soil Conservation rolled sleeves to conquer the effects of the reigning climate change in the south.

The partnering entities which ventured in a four-year Improving Adaption Capacity of Vulnerable and Food Insecure Population in Lesotho (IACOV) project seek to aid the communities in the region to adapt to the vicious climate change which left their fields deserted, cracked open with dongas and unable to produce subsistence farming.

According to the WFP Communications Expert, Mateboho Mokhothu, the project which kick-started last year is envisioned to aid the communities living in the southern region especially those exposed to hunger and starvation to develop resilience and adaption skills.

“The project is intended to improve the capacity of the people of Lesotho to manage the negative impacts of climate change and across the whole country, although it is focusing on three districts.

She continued that, “this is where the study reveals that it is the hardest hit area in the country, thus a need to start attacking the problem so that other communities from the rest of the country can learn from the fight.

“Our target is to improve the capacity of the government institutions to generate information relating to whether patterns in time and in different climate conditions. So the intention is to see government being able to execute such in time to make people aware and use that information to come up with strategies to promote their own resilience towards those negative effects of climate change.

“The other objective of the project is to create awareness to the entire population of Lesotho, basically to understand the existence and course of climate change and how it is affecting the communities, individual’s families and the entire nation.

“With all this knowledge we understand that people would be able to take the appropriate adaptive measures coming from their own consultations and suggestions due to their own experiences,” she said.

“In the third component is where people are assisted to come up with plans and technical skills according to their own specific environmental problems, to create that would ensure that their livelihoods are well taken care of and sustained under the same condition of climate change.

“The rate we are moving at now and the successes that we have already attained I can safely say we on track so we will be able to finish the project on time,” she said. The project is funded by Adaptation Fund with the money amounting to $10 million, which counts to over M150 million which is set to run for a period of four years. Minister fears for own life 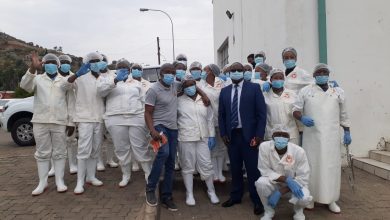